2020 Zion Half Marathon: Why We Hold The Event in February

We are excited to be back for the 2020 Zion Half! It does not seem that long ago that we had our inaugural race (2013)! Next year's race is scheduled for February 29, 2019. Leap day! It is looking like the Zion Half is going to settle into the last weekend in February for the long term, so feel free to mark it on your calendars. And yes, I hear some of you out there...

"Wasn't it below freezing at the start this year?"

"I'm not running that race until they move it to a warmer date." 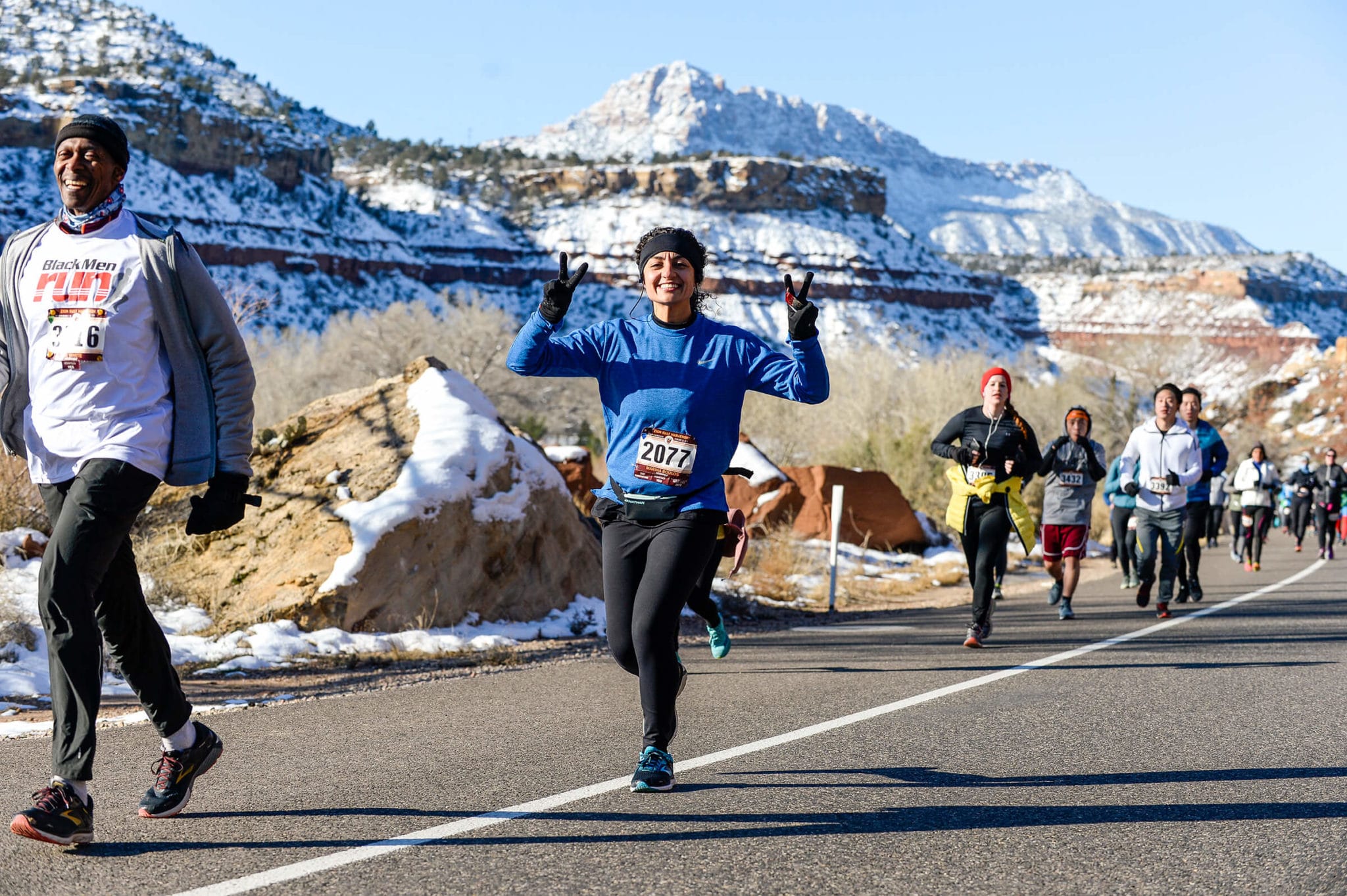 If any of those sound right to you, I understand where you're coming from, but it's not as simple as that. There's a lot to explain but I'll sum it up. I'll address the weather and date concern, but I'll also say that if you wouldn't come run this race just because of freezing temperatures then you are missing out. Just ask the 2,000+ warriors who showed up this year! It was fiercely cold, but also an incredibly beautiful experience seeing Zion in tranquility and stillness under a blanket of snow.

Why the last weekend of February? We have had the race in March and April. The two April races were anomalies. Those two years, we had alternate courses due to road construction, which took us away from the main canyon and we could be more flexible with the date. We traditionally held the race in March. So why did we change? Over the last 6 years we have watched as Zion has experienced a problem with increased visitation and capacity. The shoulder season has gotten increasingly smaller.

We aim to be in the shoulder season for 3 reasons:

So with the shoulder season now being as small as it is, the last weekend in February is a nice weekend for Zion and Springdale without a lot else going on. Visitation hasn't ramped up yet, spring breaks haven't begun, and it is a good time, for all 3 of those reasons, to hold the race.

I can't say it enough: this year's weather is beyond unusual for southern Utah. Flights into Las Vegas were cancelled due to snow. LAS VEGAS!! It was a winter storm of biblical proportions. It really was a fluke thing and not the norm. If you're unfamiliar with the area, southern Utah occasionally gets a couple inches of snow which by the afternoon completely melts away, unless you're at high elevations.

We expected the start line to be chilly, but what we had was completely unheard of. Could it ever happen again? Sure. To quote Mary Poppins, "Anything is possible, even the impossible." But had it been a week before or a week later it would have been beautiful weather. That is what we expect and that is likely what you will get when you run the Zion Half Marathon. 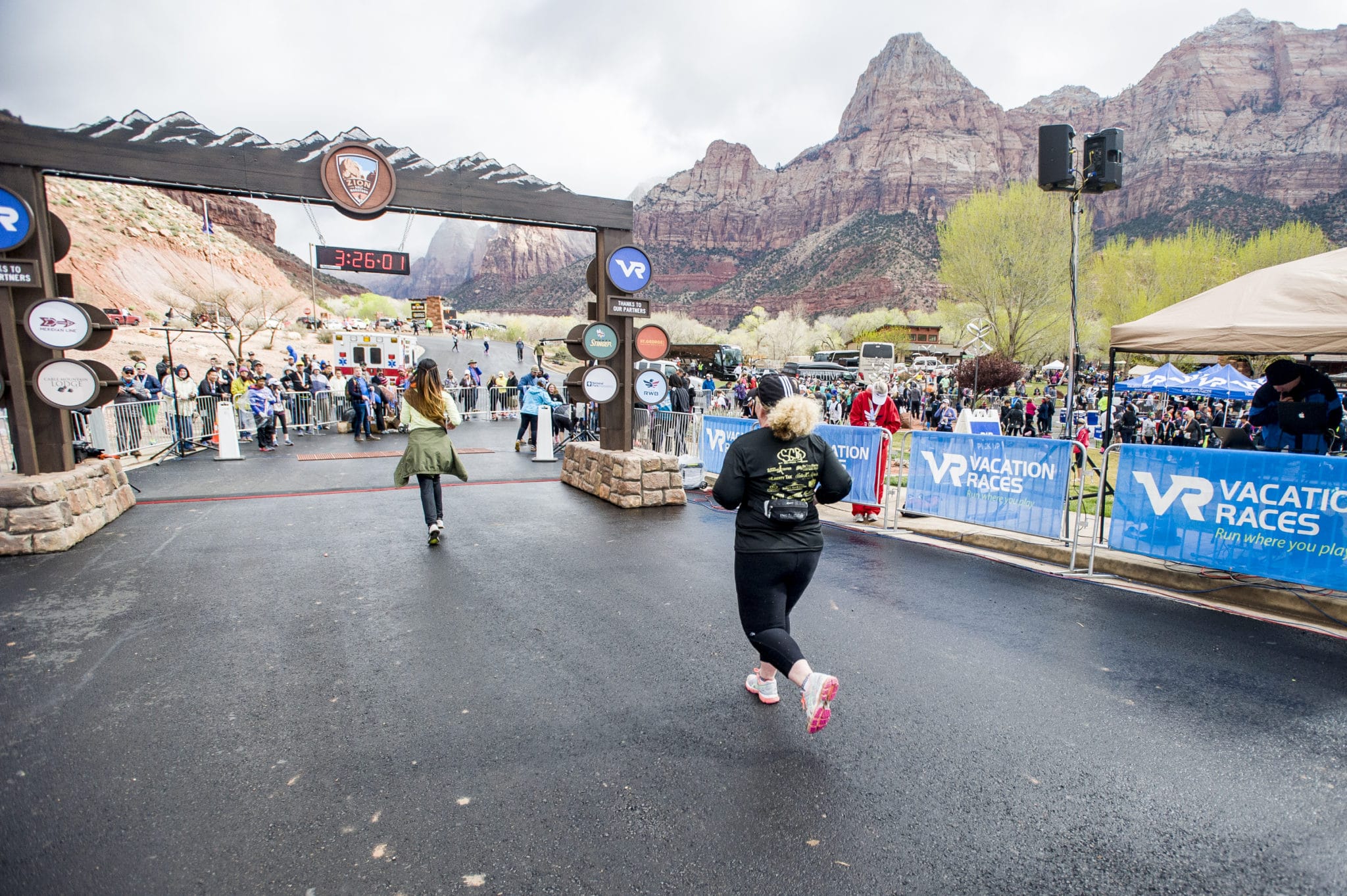 We are excited to be back on our original course. 2019 presented its own challenges, but it was a great way to celebrate the centennial anniversary of Zion National Park and the snow really did bring a beauty and stillness to Zion I have never experienced before. It was a wonderful event. We collected some great feedback from everyone after this year's race and we're working hard to implement some changes in order to improve the event for 2020.

We have sold out every year for the last 6 years and we expect our 2020 event to fill up fast, so don't wait to register!

I hope to see you in Zion.

Vacation Races has the Best Half Marathon in 5 states!

A storyteller by nature, and a very talkative one at that, Katie lives her life ensuring her story is worth telling. After obtaining her journalism degree from the University of Nevada, Reno (Go Wolf Pack!), she was determined to find a career that would allow her to combine her passion for communications and her love for the outdoors. Enter Vacation Races. She started with us in the fall of 2018 and has loved every minute of it! When she is not working, you can find her traveling the world, hiking, paddle boarding, snowshoeing and otherwise exploring the great outdoors with her boyfriend, Erik.