Goals are for Losers 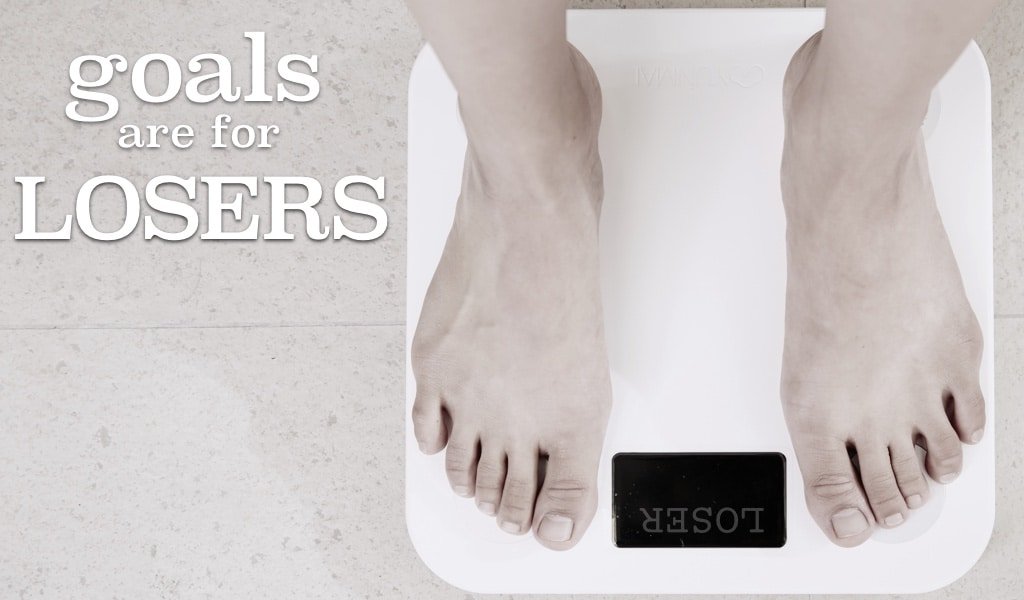 Hey friends! How are your 2019 goals coming along?

If you’re anything like me (and most other humans) you’ve already abandoned most of your New Year’s Resolutions. According to these articles 50% to 80% of people give up on their New Years goals by February and only a measly 8% end up achieving their resolutions at all! Isn’t that crazy?

Can I let you in on a little secret? It’s not your fault. I know that sounds cliché but it really isn’t. Let me explain why.

“Goal setting” is broken to start with. It’s true. Think about it. A million people want to compete in the olympics. Only a couple hundred actually do it. Having a goal doesn’t, on its own, get you any closer to achieving your goals.

But why not? Let’s take a look look at the most common goals people are setting for 2019 according to YouGov.

So some of the top 10 resolutions are: exercise more, eat healthier, save money, lose weight, reduce stress, stick to a budget, and on.

Are you seeing any problems? These aren’t goals, they’re daydreams!

“Exercise more” is meaningless. How do you know if you’ve achieved it? Exercise more than what? Than you exercised last year? Than your cousin Vinny? And what does it mean to “eat healthier” or “save money” or “lose weight”?!

“Okay, so I need to be more specific?”

You might be tempted to think that you just need to define more specifically what it means to reach your goal.

Okay let’s try that. Let’s change a couple of these to be more specific.

There, we’ve got some nice specific goals. Are we done now? Not exatly.

We’ve made some progress to be sure. But you’ll fail at these too, because outcome-goals are for losers.

Yeah I said it. That sounds really rude doesn’t it? Sorry about that. Bear with me though. I’m not saying that only losers set goals. What I am saying is that when you set outcome based goals, you’re setting yourself up to feel like a loser.

Think about it. You have a goal to lose 50 lbs. That’s a very worthy goal and I hope that you achieve it. The problem is that every day that you stand on the scale and weigh yourself and haven’t achieved “lose 50 pounds” you’re going to feel like a failure. And your brain doesn’t like to let you feel like a failure. So, after a few days of this (weeks at best) you’ll give up. Because you’re being rational.

Here’s what I recommend. It’s worked pretty well for me and it’s based on modern research.

Step 1: Define what kind of person you want to BE

Step back for a second and think about the KIND OF PERSON you want to be. Don’t get bogged down in the details right now. Just outline some of the attributes of the kind of person you aspire to be.

How does that feel? Hopeful? Doable? Honest?

Now that you’ve defined the kind of person you’re becoming we need to identify some of the habits of that ideal person.

The trick here is to start small. Like really-really–REALLY small. Go as small as you can and then go smaller. Each daily habit should require no more than 10 seconds of effort.

Here’s what I mean:

Like I said, small. So small, in fact, that there’s no excuse for not doing them. You can’t say, “I was too busy to do 2 pushups” or “I didn’t have time to order a small soda.” If a few days do go by and you’re still failing to incorporate these micro-habits, make them smaller.

The point here is to begin establishing a habit routine. Are you going to lose 50 lbs. by doing one pushup a day? No. Are you closer than you were yesterday? Yes!

Of course, if you do your 2 push-ups and feel like doing more, go for it. Want to skip the soda altogether today? Awesome! You’ll feel even more on top of the world.

So you’ve defined habits that are small enough that you can commit to doing them every single day. Now what?

Well, the biggest risk at this point is just forgetting. Your current routine is so hardwired into your brain that it’s hard to change it. You get up, go to the bathroom, maybe look at your phone notifications, get in the shower, get dressed, eat some breakfast, drive to work, etc.

And I’d be willing to bet that you’re pretty consistent with these habits. Have you ever gone to work without getting dressed first? Or eaten breakfast without going to the bathroom first? I doubt it.

So if you want to incorporate new habits into your life you’ve got to link them up with existing habits.

Again, the point isn’t do “practice guitar for 30 minutes each day” or “do 50 push-ups every morning” because you’ll fail at that within a week. The point is to do 1 tiny thing that helps to solidify the desired habit into your normal routine.

Step 4: Train your brain to be on your side

Doing steps 1–3 will get you pretty far but step 4 will really kick you into high gear.

Like I said, your brain doesn’t like to fail and yet you’ve likely set and abandoned so many goals in your life that your brain is a bit suspicious. You need to train yourself to really believe that you’re winning every day and making progress toward your vision.

How? Every time you perform your micro-habit successfully, remind yourself (out loud if possible) that “I’m becoming the kind of person that [exercises regularly / saves money / plays the guitar].”

You don’t need to wait 6 months to see if you’ve lost 50 lbs. because losing 50 lbs. isn’t the goal. The goal is to be the kind of person who exercises. And every day that you exercise (no matter how little), you’re winning.

In time, your self-perception will update to this new normal lifestyle. At that point you can scale up your daily goals if you want to (e.g., 5 push-ups instead of 2, water instead of Coke, etc.) but I’m betting you won’t need to because you’ve developed the habits of the person you’re aspiring to be.

Good: Outcome goal = “Run a half marathon”
You’re a failure every day until you reach it.

Better: Process goal = “Run every day”
You’re a winner every day that you do it.

Best: Identity goal = “Become a runner”
You’re a true winner because you’re developing into the person you want to be and redefining your self-perception.

Once you’ve defined your identity goal, break it into process goals that you can do every day without fail (e.g., “Set my running clothes out before I go to bed”).

Good advice or lots of mumbo jumbo? Should we publish more of this kind of content? Let us know what you think in the comments.

Ryan claims to be a "product in infinite beta". He loves hamburgers and peanut butter (but not together) and he should run more. He also really enjoys writing bios in the 3rd person.